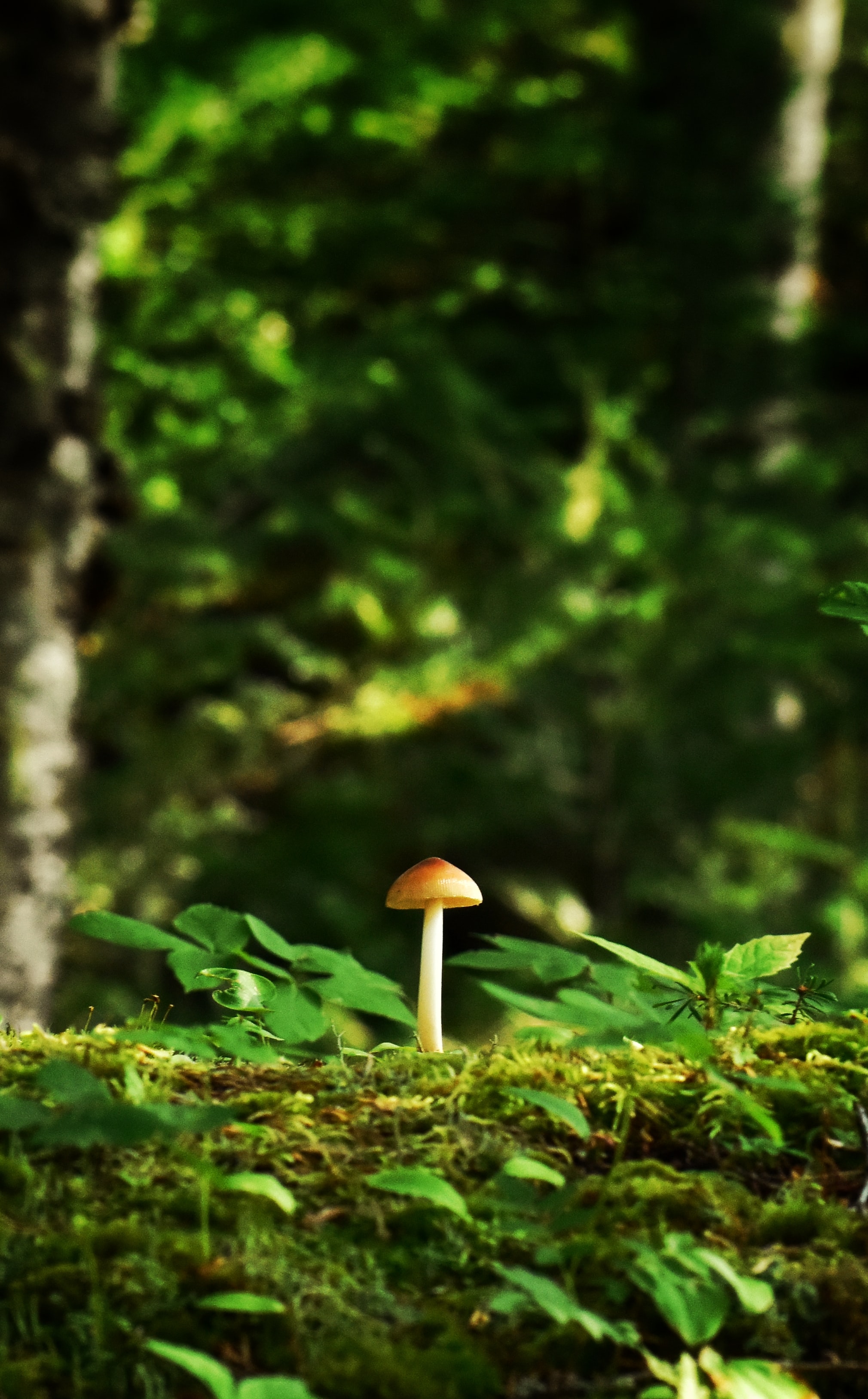 Magic mushrooms. Shrooms. Mushies. Music festivals. College dorm rooms. A young person who reads astrology, travels to South America and refuses to wear deodorant. Psilocybin mushrooms have gotten a bad rep. In the United States, they are not accepted in the mainstream culture, legally or socially, and when surveyed, only 0.1 percent of Americans report using psychedelics (this includes LSD, MDMA, mescaline, and peyote).

Psilocybin, the psychoactive component in magic mushrooms, is a psychedelic fungus that can be found in the wild or can be easily grown in sterile, high humidity conditions. There are over 200 species but the most commonly consumed are Psilocybe cubensis, Psilocybe subcubensis, and Psilocybe semilanceata. Psychedelics are defined as hallucinogens, which alter states of consciousness by influencing the serotonin 2A receptor agonism in the brain. As a whole they are known to cause changes to cognition and sensory or auditory hallucinations. The word psychedelic, coined by British psychologist Humphry Osmond in 1956, comes from the Greek word psyche which means “soul” and dēloun which means “to make visible or reveal”. The name itself reveals the deeper, spiritual implications of these substances, the extra-ordinary states that they provoke, and the notion that they can access parts of the mind that are typically unused. But it is no coincidence that they are not accepted in mainstream cultures around the world, particularly in the United States.

In 1960, the psychedelic mushroom became associated with antiauthoritarian counterculture as musicians, filmmakers and visual artists began to promote its use. Simultaneously, research was being done on psychedelics, with great publicity and often with poor understanding and regulation. The youth had an emerging distrust for the United States government, disillusionment regarding the American Dream, and a desire for social justice. There was an increased desire to disrupt institutions or the “old” way of doing things, and the call for freedom of speech and expression. All of this was offset by inter-generational trauma caused by World War II and the divisiveness and intense costs of the Vietnam War occurring during that time period. In an effort to preserve order and control, Nixon passed the Controlled Substance Act in 1970, making psilocybin (and other psychedelics) illegal. Any and all academic or government research on psilocybin ceased and the public was warned to beware the dangers of psychedelia. According to the U.S. Drug Enforcement Agency, psilocybin is a Schedule 1 Drug and it “has a high potential for abuse”, “has no currently accepted medical treatment use in the U.S.”, and “has a lack of accepted safety for use under medical supervision”. In other words, psilocybin is dangerous, addictive, and has no benefits.

But these claims are flimsy on only a brief examination of the scientific research. In the past 20 years, well-reputed research institutes such as John Hopkins and Heffter are using organizations such as MAPS (The Multidisciplinary Association for Psychedelic Studies) to fund private research, despite intense regulations and lack of government funding. These studies are enabling huge leaps forward in understanding psychedelics and the brain and are revealing the profound benefits psilocybin has on the psyche. There is already repeated evidence to suggest that psilocybin offers minimal risk of abuse and side effects are not significant. Some findings suggest that psilocybin can benefit conditions, such as depression, PTSD, anxiety, and addictions, that don’t respond to typical therapies or drugs prescribed for mental illnesses. And studies on healthy participants suggest increased well-being, connectedness, and divergent thinking (i.e. creativity) up to one-month after ingestion. Unlike most prescribed medications, psilocybin may have the remarkable ability to work with the neuroplastic nature of the brain, creating beneficial and lasting changes in the brain structure that evolve even after taking the psychedelic. The implication would be that the benefits gained by using psilocybin therapeutically could have permanent effects on the brain structure through repetition and treatment that enables the experience to be integrated.

The reality is this entheogen is not new–it grows on every continent of the world and has been intertwined with human history as a medicine and guide for thousands of years. Evidence reveals that psychedelic mushrooms have appeared as far back as Aztec, Mayan, and Mesopotamian cultures. A prehistoric mural found in Spain (2.5 million years ago) suggests the ritualistic use of fungus and the ancient Egyptians adorned Temple walls with hieroglyphic depictions of mushrooms as food for royalty and “a gift from the God Osiris”. Even the Rigveda one of the four vedas and one of the oldest yogic texts, repeatedly mention a substance consumed to achieve eternal life called Soma. Remarkably researchers believe Soma was a psychedelic mushroom that may have influenced the creation of yoga 3,500 years ago. To this day, innumerable cultures around the world utilize psychedelic plants and fungi as medicine with the guidance of a Shaman or Elder to achieve higher states of consciousness and to release diseases of the mind and body. In ritualistic settings, psilocybin has been known to induce intense experiences such as birth, death, meeting God, personal knowing or gnosis, connection to all people and things, and the disintegration of time and space. Many report that psychedelics invoke a state not unlike those achieved by deep meditation.

So then the question must be asked…

Why is psilocybin, this ancient and naturally growing entheogen, still illegal on a global scale if both modern science and ancient cultures are revealing over and over again that it is not only not dangerous but it offers extensive benefits to the mind, body, and spirit? Why is it taking us so long to return to this viable tool for self-healing?

As one would expect the answer is multi-faceted and complex, particularly since the global criminalization of psilocybin cannot be traced to any single event and there does not see to be a universal, legal consensus that the substance offers scientific or religious benefits. But the timeline below offers a brief picture of why and how psilocybin and psychedelics as a whole became stigmatized through the progression and overlapping interactions of science, government regulation, and public opinion.

It is clear, the narrative is changing. In spite of legality and stigma, psilocybin is gaining traction as studies continue to pile up, documenting the immense benefits of psychedelic therapies. Science, as opposed to opinion, is now shattering the narrative of dangerous psychedelic drugs and it seems that the prospect of legalized, medicinal psychedelics is increasingly likely. Some have even documented a trend in the silicon valley elite using “magic mushrooms” (micro-dosing and medicine ceremonies) as tools for creativity, self-development, and increased energy. With the advent of biohacking and increased performance, psilocybin and other psychedelics fit nicely in this fascination with maximizing physical and mental potential and pursuing expanded states of consciousness. This is not say, however, that these tools should be approached without respect. It could be argued that modern use of psychedelics to improve work performance or to aid in excelling within a consumerism work force is forgetting the tradition and ritual surrounding the psychedelic experience, especially if the user is seeking something or taking from the entheogen to achieve wealth, material success, and greater productivity. Curanderos and shamans have not treated these psychedelic entities as servants, instead they treat them as gods or guides and approach them respectively as both conscious and aware beings. For example, as opposed to many Americans who fly to the Peruvian jungle to drink ayahuasca in the “traditional” ceremony, the tradition was actually that only the healer and not the patient consumed the entheogen–and this was after years of rigorous training and communication with the plants. In this vein, it is important to note that not all should consume entheogens. Not all minds are compatible or at the stage of development to work with a psychedelic because the shattering of ego and identity, although harmless to the physical body, can be intensely traumatizing and damaging if the user already has unprocessed trauma or has never experienced non-identification with Self. It is important to prepare the mind for an experience of surrender and immense discomfort, to know when one is at a place of stability for such an experience, and ideally to work with a professional guide, therapist, or shaman. Approaching the psychedelic experience without expectation, without seeking is key. Practicing mindfulness and meditation techniques are helpful and preemptively examining the nature of one’s mind and environment can mitigate the uncomfortable experiences some report during trips (although important to not forget that discomfort is not a bad thing and can yield immense healing and growth and the research supports this notion). Things are looking up for Psilocybin access in modern American culture and psychiatry is finally returning to these highly effective, ancient medicines for their long-term benefits and minimal side effects. But hopefully, as we move in to a world that welcomes psilocybin in to our homes, bodies, and minds, we don’t lose sight of the wisdom these powerful and conscious beings can offer the collective. Psilocybin is not merely a medicine, but a bridge that connects us to our ancestors, nature, and a state of universal oneness.

“The ordinary waking consciousness is very useful and, on most occasions, an indispensable state of mind; but it is by no means the only form of consciousness, nor in all circumstances the best. Insofar as he transcends his ordinary self and his ordinary mode of awareness, the mystic is able to enlarge his vision, to look more deeply into the unfathomable miracle of existence.” ― Aldous Huxley

“We are sneaking psychedelics back into our society through research like the MDMA research that’s going on, through the research for the use of marijuana for pain, through research with the dying [with psilocybin], and ultimately we will do the same kind of stuff about alcoholism, about prison rehabilitation, so on. I mean, its obvious that psychedelics, properly used, have a behavior-change psychotherapeutic value. But from my point of view, that is all underusing the vehicle. The potential of the vehicle is sacramentally to take you out of the cultural constructs which you are part of a conspiracy in maintaining. And giving you a chance to experience once again your innocence.” ― Ram Dass